On June 4 2016 we decided to go on a little road trip to Red Deer to meet up with some friends from St. Albert. So we thought we would meet half way and take in some lunch and of course, hit up a coffee shop while we were there. While doing some research on the shops in Red Deer, we came across a few and Dose was one of them.

A colleague from work ,who now lives in Red Deer, told me to check this place out, so we thought why not. There is a bunch of cool shops downtown nearby Dose to check out. If you are in the market for a tattoo, this is where you want to be as there is a ton of tattoo shops all over the area. We arrived at Dose and from the outside it look like a quaint little place with a few tables and umbrellas out on the sidewalk for you to sit down and enjoy your drink.

We order cold drinks, as it was about 26 degrees outside. We ordered a Dulce and an Orange Cordial. The Orange Cordial was basically an Italian soda that had some flowers on top, presentation was quite nice, but could have used a bit more orange flavoring in it. This was the same for the Dulce, could have used a bit more caramel in it. What is strange about this is that the friend that recommended this place said that his Mocha was the same, lacking flavor, could have used another shot of chocolate. I also bought some coffee beans from them, they were roasted in Barcelona. The flavor was what intrigued me, Raspberry, Honey and Spices. It was a bit expensive at $25 for the bag. 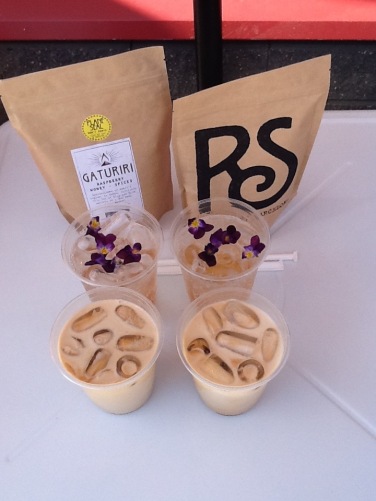 The guys working here were a bit quirky and were a bit difficult to understand at times.

The inside of Dose had some cool artwork and this funky hanging orchid on the wall.

At the end of the day and if I was in Red Deer again, I would check out other shops I read about and probably would not go back to Dose Coffee Company, sorry guys.