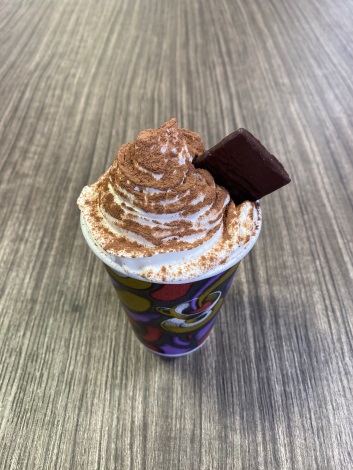 This velvety choco-mint blend is smooth as silk going down and a match made for the taste buds! It’s topped with whipped cream and an After Eight chocolate – rich and comforting!

We were excited to try a mint hot chocolate and we are afraid to say it let us down. We couldn’t taste mint anywhere except in the After Eight that was placed in the whip cream. It was also sad because it was canned whip as well.

There was a really good chocolate flavour but nothing else. Also with the cocoa on top of the whip, once it was all melted it was floating on top of the hot chocolate and it was not that great to get that in your mouth. We would suggest a light dusting instead of the amount that was on the whip for this hot chocolate.