The other night sitting at home trying to decide what to have for dinner, I thought, let’s go check out Angel’s Drive-In in Bowness. This place has been doing some major renovations and are finally complete.  I remembered going to this place as a kid for ice cream, because it is just down the block from Bowness Park. 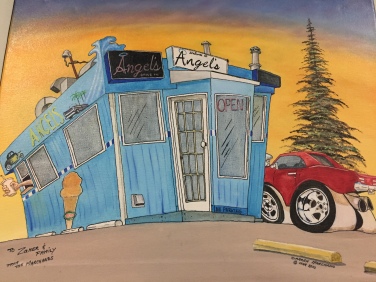 Inside, the interior is boldly coloured but simple, with a combination of modern chairs and small booths. Its décor is very 50’s diner vibe and it is really cool with old vinyl records on the ceiling. The place was very busy with people sitting as well as people doing take out. When you walk in, you go to the counter, order your food, and hope there is a table available, seating is pretty limited. We managed to snag a table as soon as we walked in. 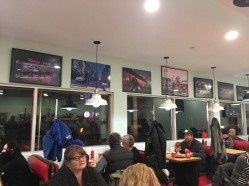 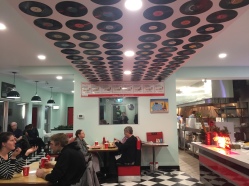 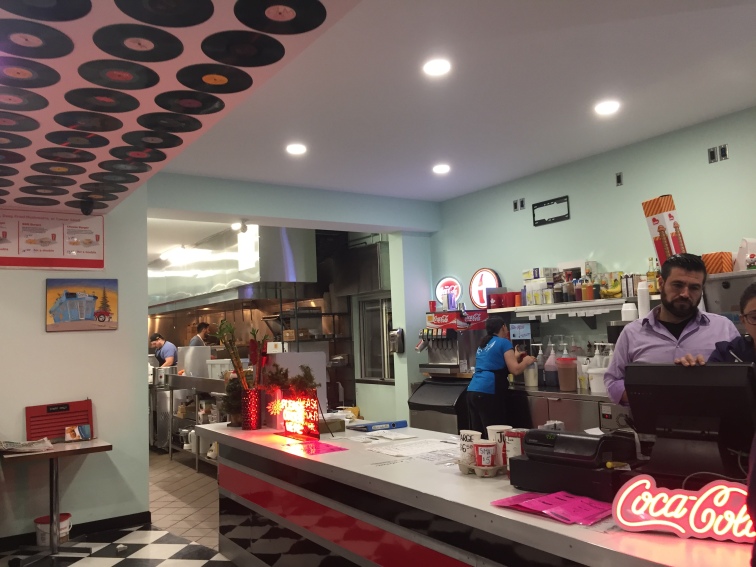 One thing I didn’t like was it took about 20 minutes before we received our drinks and then food showed up about 10 minutes after that. I don’t mind waiting as long as the food comes out hot and cooked. Which it did. I guess I would say this place is a diner/restaurant and not a fast food joint.

We found out pretty quickly when our fries were delivered, piping hot, one thing I would have preferred is the fries to have been fresh cut, which these were not. This is too bad because for a place like this, you would expect that.

The first thing we noticed about our burgers was the size of the patty to the bun size. The patty was exactly the same size as the bun. On the single burgers, the bun to meat ratio was more bun that meat which was kind of disappointing. My double burger was the right meat to bun ratio. The beef patty was remarkably good – well-seasoned, and actually tasted as if it had been made from fresh beef. I do wish that they would have hand formed the burger. 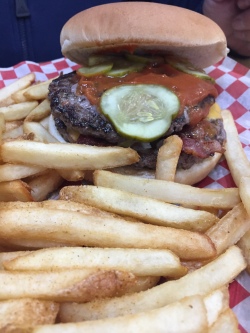 We ordered a Pineapple milkshake, a Strawberry milkshake and a bottle of water as mentioned above. The pineapple shake was excellent, it was very thick and creamy and had great flavor. The strawberry milkshake was made very similar to mine but my daughter was able to order it with fresh fruit, which we found amazing for a diner style restaurant.

The staff were extremely friendly and helpful.