On our way to Nelson we decided to take our time and visit a couple coffee shops along the way. Our first stop was in Blairmore at a cute little cafe called Stone’s Throw Cafe. This cafe is located on Main Street. This place has been around since 2003, the place we visited was their second location, and they have been here since 2006.

The place is rather deceiving, when you stand outside, the café doesn’t look to large, but when you walk in, it is actually quite big inside. When you walk up to the café a old screen door welcomes you. Everything inside is eclectic, nothing matches, and there was quite a few people there when we arrived. There was roughly ten tables and we decided to sit at the front in the window so we could see everything. 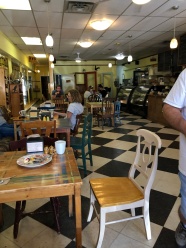 I ordered a Latte for $4.15 and it was made using Crowsnest Coffee Company which is local roaster. The coffee they were serving when we were there was the Pic’s Bootleg Beans. It is a blend of Indonesian and Central American beans It was more of a chocolatey tasting coffee but yet very subtle and quite tasty.

My wife ordered a Berry Smoothie for $4.80 and it was delicious, you could really taste each of the berries they used in the smoothie.

My daughter ordered a London Fog for $4.15 and it was good. Only sad thing is that they use Twinnings tea, she said she wished that used a better quality of tea. 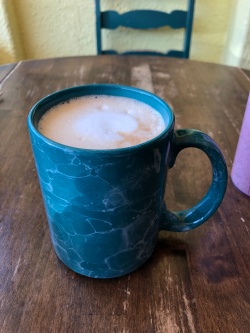 My wife and daughter both ordered the Eggs Benny for $9.55 and it was delicious. They put the eggs and hollandaise on waffles which was so good. The hollandaise was more like an egg salad base and had similar flavour an egg salad. 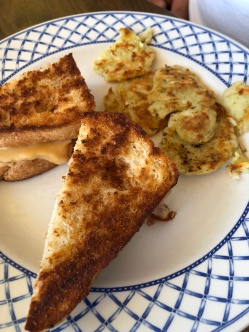 The owner was very friendly and the other people working there were very nice. The food came really quick and was hot. We also got some snacks before leaving that were really delicious as well. Everything is made in house which is always amazing.

There was only street parking available out front and on the other side of the street.

If we are heading back through the Crowsnest Pass, we would definitely stop there again and get some food because this place was amazing.