Round Two after Timbertrain.  We walked around the corner literally and seen that there was a Bean Around the World on the corner of West Hastings and Cambie.  This is a very nice location across from The Vancouver Film School and kiddy corner to one of Simon Fraser University’s buildings. 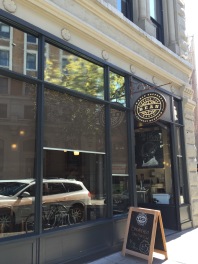 This location has one long table, a high bar, and a bunch of little tables all with industrial stools and chairs.  The bar is very industrial and it looks like they have three different kinds of beans that they sell.

We also ordered more caffeinated beverages, my daughter ordered a Hot Chocolate, my wife ordered a London Fog, and I ordered a Vanilla Latte.  I also ordered an Orange Date muffin, which was delicious.

The drinks were tasty and well needed even tho we had just drank other caffeinated beverages over at Timbertrain.  The Hot Chocolate was very chocolatey, the vanilla latte was very smooth the coffee was not bitter, and the London Fog was creamy and delicious.

Since it was so beautiful outside we said we had to eat on a patio somewhere.  So why not Granville Island, we had been to Bridges before but not with my daughter.

My daughter and I ordered the halibut and chips, my wife ordered the CAB Sandwich (free range chicken, avocado, and bacon), and my son ordered the baked halibut (rice pilaff, sautéed kale, and a lemon dill sauce).

Everything was absolutely amazing.  The only thing is I ordered a starter Ceasar Salad and I never got it.  Other than that the service was good.