Out on an adventure to find a new coffee shop to try on a lovely Sunday in Calgary. We decided to head downtown to a little shop in Victoria Park called Little Henry. It is the little brother of Ten Foot Henry. 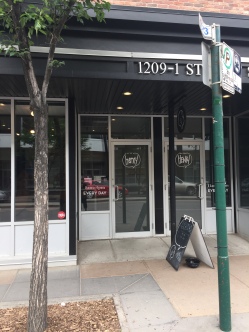 They are located in a former pop-up shop just down on 1st Street SW. There are so many unique locations down in Victoria Park including Vine Arts, Yellow Door, and Boxcar Cafe.

When you walk in it is literally little. You have three tables in the window and a communal table that sits eight. We got there quite early so their display case was still empty, but the barista said most items don’t come out until 11am. What we did see looked amazing, including a very appetizing coconut cake.

After reviewing the menu we decided upon a Naked Fog, which is a common London Fog with Naked Tea). We also ordered two Henry Proofs, which are a version of Bulletproof, they include coffee, organic butter and sometimes an egg yolk. Shortly after we ordered my son got a ‘Golden Milk’ which was almond milk, ginger, tumeric, cinnamon, black pepper, coconut oil, and honey. All the beverages were amazing.

As for the decor it was very contemporary and clean. On one whole side of the shop was full of bookshelves with cooking books and a giant Little Henry poster. Behind the bar there is a divider  wall with frosted glass to hide the restaurant. 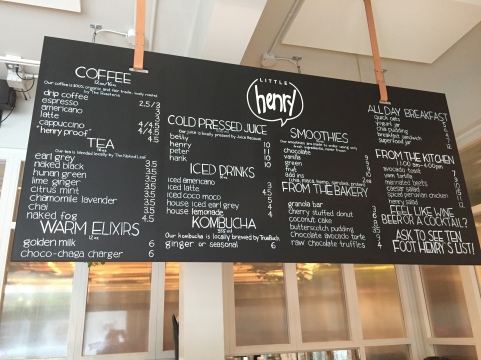 On the counter by their coffee machine they had a frame saying that if you bring back five mason jars any size you can get a free coffee, tea, or warm elixir. Which is nice to be a part of the reuse and recycle cause.

I hope everyone can make it down to try this unique coffee shop down in Victoria Park.